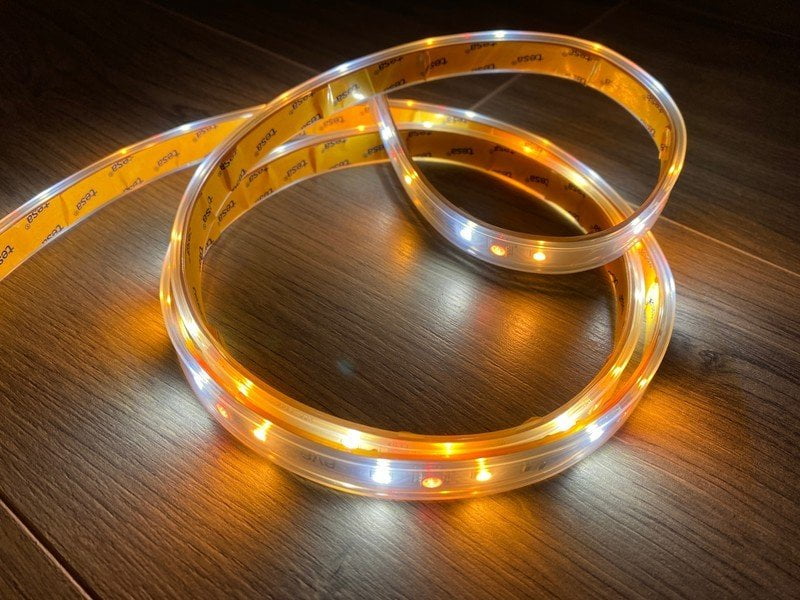 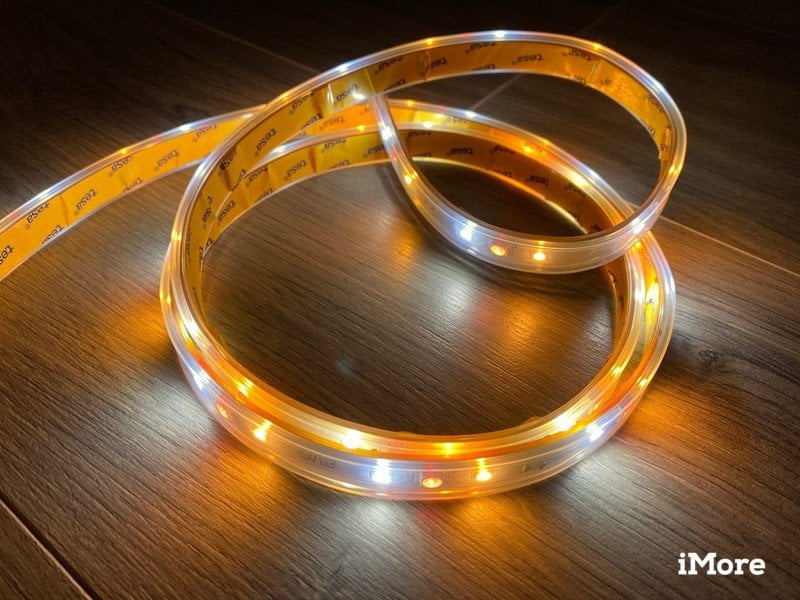 When Eve’s HomeKit-enabled Light Strip made its debut back at CES 2019, I was intrigued and immediately put it on my list to pick up the day it became available. Despite my initial excitement, Eve’s Light Strip’s release somehow managed to slip by me, allowing it to join a small list of HomeKit-enabled accessories that I didn’t have for my home. 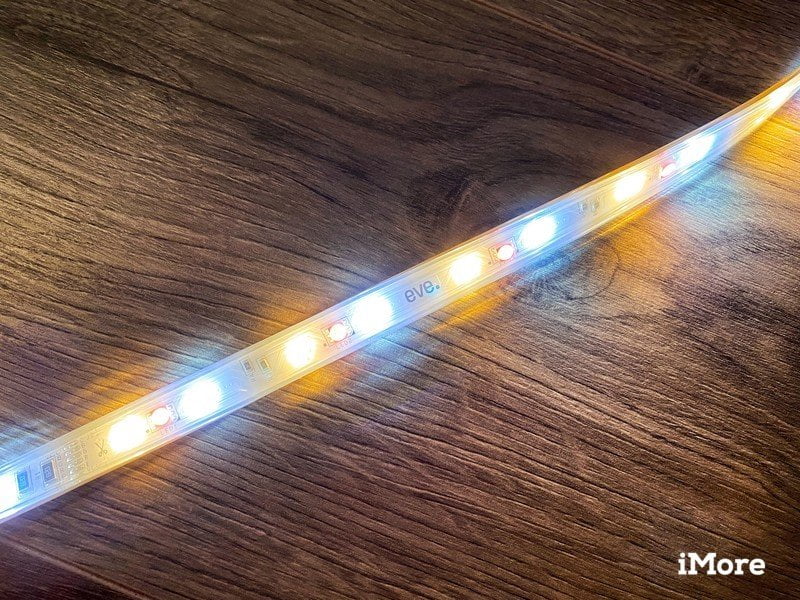 The Eve Light Strip is available at most online retailers like Amazon and Best Buy in a standard starter kit for $80. The kit includes everything you need to get up and running: the base light strip, control module, and power supply. Extension kits are also available for $50, and if you know you need the extra length before purchasing your first set, you can pick up both the starter kit and extension in a bundle directly through the Eve online store.

Eve’s online store also makes the light strip available in a bundle pack that includes its excellent Eve Cam smart security camera, which supports HomeKit Secure Video. By going the bundle route, you will save a total of $30 for the two, and if you want even more savings, you can score a free Eve Extend hub if you purchase three Eve accessories. 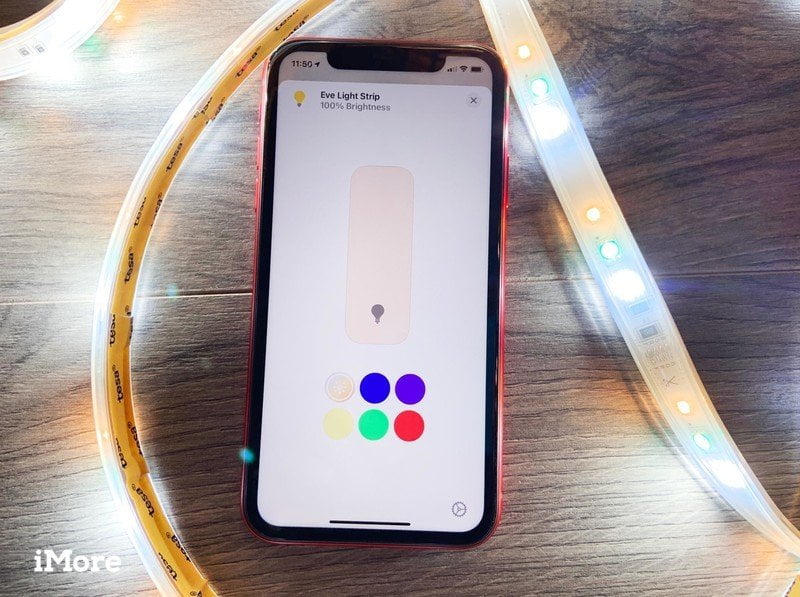 The Eve Light Strip is pretty standard fare design-wise as it arrives in a single 6.6-foot section lined with multiple LEDs inside, and mounting tape around the back. The light strip extends up to 32.8-feet with optional extension kits, and it can be cut-to-length in designated areas if needed. A detachable 24-volt power supply powers the Eve Light Strip, and it consumes 24 watts of energy during operation.

Once paired, commands sent via an app or Siri voice commands execute within seconds thanks to the speedy Wi-Fi connection.

Eve’s strip communicates directly to HomeKit over 2.4Ghz Wi-Fi without the need for a dedicated Eve-branded hub, which is always nice. However, for out-of-home remote controls, a HomeKit resident device, like an Apple TV, HomePod, or iPad, is required. All of the smarts are in a small control box that attaches in-between the power supply and light strip, and it is devoid of lights and physical controls, preventing it from standing out too much.

Setting up the light strip is quick and easy as it goes through HomeKit for pairing, even if you opt to use the Eve for HomeKit app. A simple scan of the HomeKit pairing code is all you need to bring it to life, with no account registration or Wi-Fi password entry required — something that I always appreciate. Once paired, commands sent via an app or Siri voice commands execute within seconds thanks to the speedy Wi-Fi connection. The light strip’s Wi-Fi connection has also been solid during testing, as I have yet to experience issues with response or reliability.

Like most light strips, the Eve Light Strip supports the ability to display millions of colors and shades of white light, but does so with a unique triple-diode design. As the name suggests, Eve’s Light Strip sports three LEDs: one that produces RGB, one for cool whites, and one for warm whites. According to Eve, this design allows the light strip to blend colors and shades to create a broader range of capabilities.

Eve’s strip can reach up to 1,800 lumens peak, which is beyond what you get with most light strips that top out at 800 lumens.

Thanks to this design, I immediately noticed that the Eve Light Strip produced better greens and blues during testing than most of its competition — especially when it came to darker shades. I like how the Eve Light Strip created a convincing green shade and not some light blue hybrid that you get with some cheaper strips. However, the Eve Light Strip’s green color reproduction is still just good enough and not great, so don’t expect any true forest greens out of it.

Where the Eve Light Strip truly shines, though, is brightness. Eve’s strip can reach up to 1,800 lumens peak, which is beyond what you get with most light strips that top out at 800 lumens. I love how the Eve Light Strip can light up an entire area on its own, making it suitable for more than just accent lighting, and I could easily see it used for overhead lighting in smaller spaces. The maximum brightness output alone puts the light strip near the top of my list, as it elevates the overall ambiance and experience. 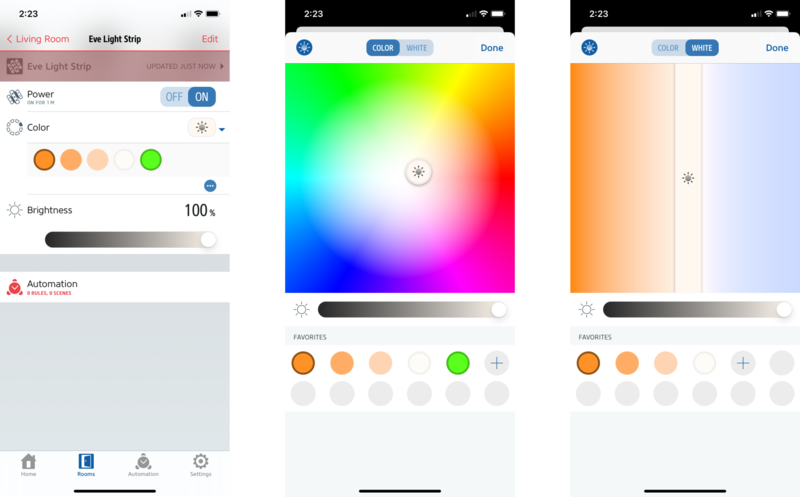 While most of the light strip’s features are available without the manufacturer’s app, I recommend giving the Eve for HomeKit app a download. Eve’s app is easy to navigate, and I like how it unlocks additional automation capabilities that you don’t get with the stock Home app.

Light strip controls in the Eve app include quick access to favorite colors, large pickers for color and color temperature, and a horizontal slider for brightness adjustments. The Eve app also provides two advanced light strip settings: one for setting the default power-on behavior and an option to choose between color transition speeds. The default power-on option, in particular, is a convenient feature since you can have it set to turn on to white light without having to set up automation. 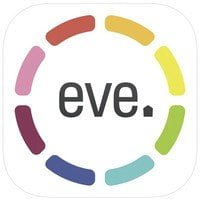 Moving over to HomeKit, I love how the Eve Light Strip supports all of the familiar controls, automation, and voice commands that you get with other accessories. Through the Home app, you can adjust brightness levels with a slider, switch up colors by tapping on a preset, or change color temperature on-demand — all of which I do multiple times a day. 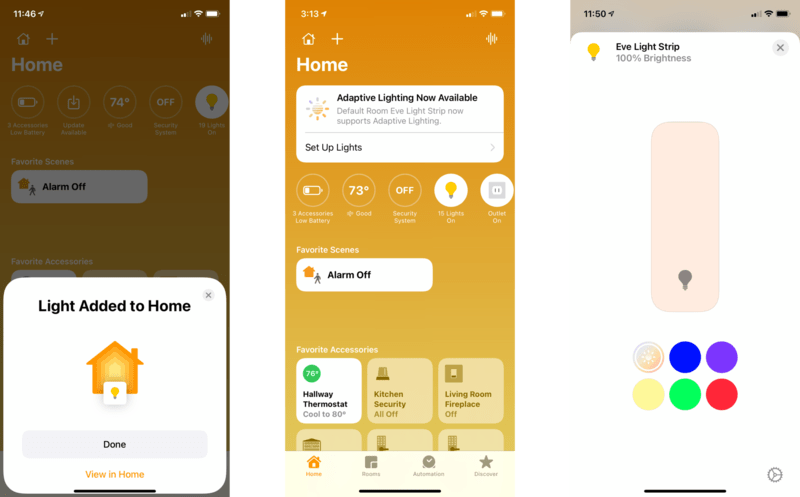 The Eve Light Strip differs from other HomeKit light strips by having support for HomeKit Adaptive Lighting. Apple’s latest HomeKit feature automatically adjusts the color temperature of compatible lighting accessories throughout the day to help with focus and sleep.

A typical day with HomeKit Adaptive Lighting and the Eve Light Strip works like this: warmer tones in the morning to ease you into the day, cool white light in the afternoon to energize the mind, and finally, back to warmer white in the evening to promote rest. While I find that the warmer tones are not quite warm enough for my taste, it is rather neat to see the Eve Light Strip adjust as time passes. With HomeKit Adaptive Lighting, it genuinely feels like smart lighting is finally becoming, well, smart. 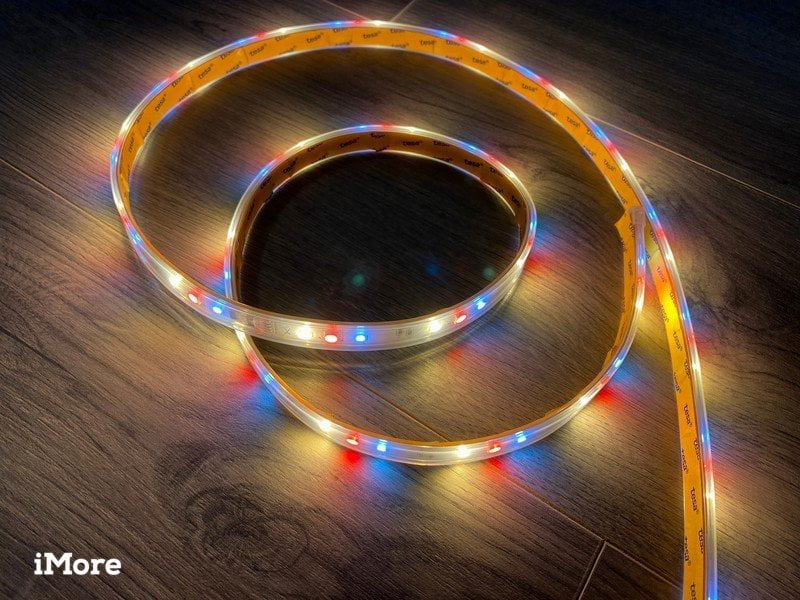 Although it sports the triple-diode design, Eve’s Light Strip only supports the ability to produce one solid color at a time — at least intentionally. After unboxing, I was excited to see how the various LEDs showed different colors, so I immediately thought it supported multiple-color functionality. However, the excitement quickly faded as I learned that two of the diodes only produced shades of white and how both the Eve for HomeKit app and the Home app didn’t provide a way to stagger the three.

The Eve Light Strip also doesn’t support any form of media-syncing capabilities. The light strip lacks an integrated microphone, so you cannot use it as a music visualizer, and you can forget about using it as bias lighting for your TV — unless you want a solid light background. Along the same vein, Eve’s strip doesn’t come with lighting effects like fades and color transitions, at least out of the box. You can use a third-party HomeKit app to get this type of functionality, but it is a little baffling as to why this isn’t available in Eve’s app. 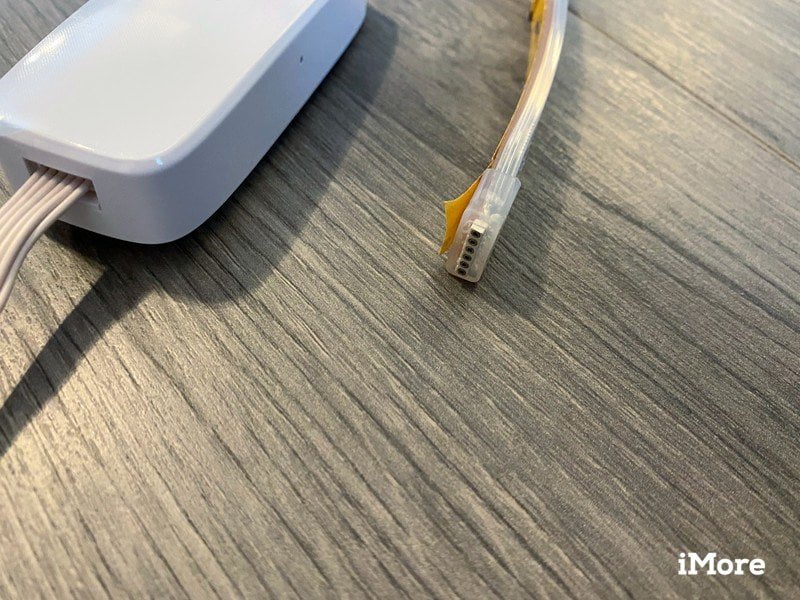 Another bummer is that the Eve Light Strip does not feature weather-resistance and is indoor-only. I would love to see an updated model that works outdoors down the road, as the epic brightness output could make the strip an interesting alternative to traditional outdoor lighting. Plus, if Eve were ever to give users the ability to customize diode colors, the light strip could mimic holiday lights like candy canes, which would be awesome.

Finally, with Eve Systems being all-in with HomeKit, the Eve Light Strip only works with iOS devices and Siri. While I see this as a plus for the privacy aspects and how it simplifies things, it may be a massive issue for those with households that like to mix things up, so it is worth mentioning. There is no Android app available, and it doesn’t work with Amazon’s Alexa or Google Assistant. It’s HomeKit or nothing with the Eve Light Strip. 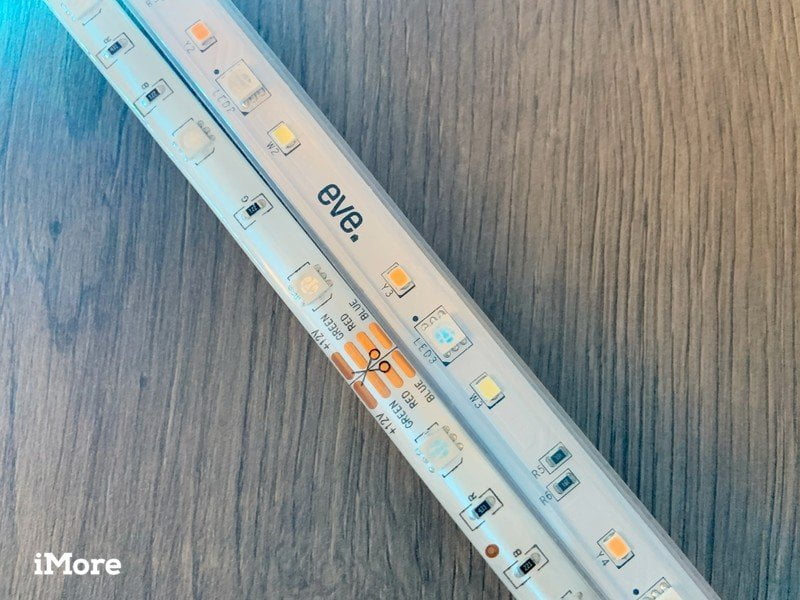 As I previously mentioned, the Eve Light Strip has plenty of competitors, but for the sake of this Eve Light Strip review, we will only compare it to those that support HomeKit. The best HomeKit light strips not only work with the Home app and Siri, but they also bring unique features like alternative color and connectivity options, and come in different lengths.

The closest competitor to the Eve Light Strip is the Nanoleaf Essentials Light Strip. Nanoleaf’s strip has a peak brightness of 2,200 lumens, supports HomeKit Adaptive Lighting, and features the new hot wireless protocol, Thread. Nanoleaf’s light strip also costs $30 less than the Eve Light Strip, but like the company’s Essentials A19 Light Bulb, it is incredibly hard to get a hold of at the moment. 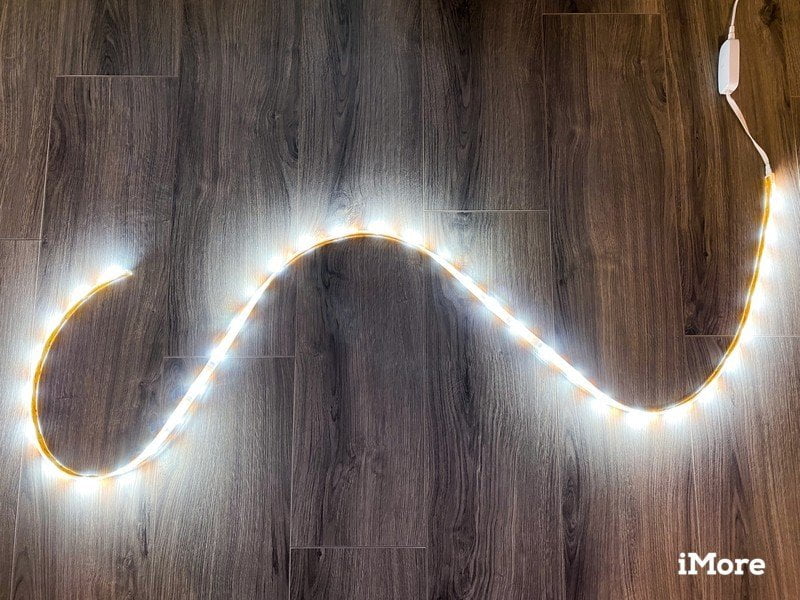 Another HomeKit-enabled alternative is the Meross Smart Wi-Fi Light Strip. The Meross light strip doesn’t come anywhere close to the maximum brightness levels seen with the Eve Light Strip, as I estimated it to be around 800 lumens in my recent review. What the Meross light strip has going for it, though, is its cheap sub-$50 price, lack of hub requirement, and its insane length. The Meross strip comes in a kit with two 16.4-foot sections, meaning you get a total of 32.8-feet for less than the price of a 6.6-foot Eve Light Strip.

Of course, two of the most popular smart lighting brands, Philips Hue and LIFX, also offer HomeKit-enabled light strip alternatives. The Philips Hue LightStrip Plus is the gold-standard for light strips with the ability to display 16-million colors with rock-solid reliability and ultra-fast response times. The LightStrip Plus retails for $10 less than the Eve Light Strip, but it requires a Philips Hue hub for HomeKit, and it peaks at 1,600 lumens. The LIFX Z LED Light Strip, also available at the $70 price-point, drops the hub requirement and mixes in multiple color zones, but it isn’t as bright as the Eve Light Strip’s 1,400 lumens max.

Eve Light Strip: Should you buy it? 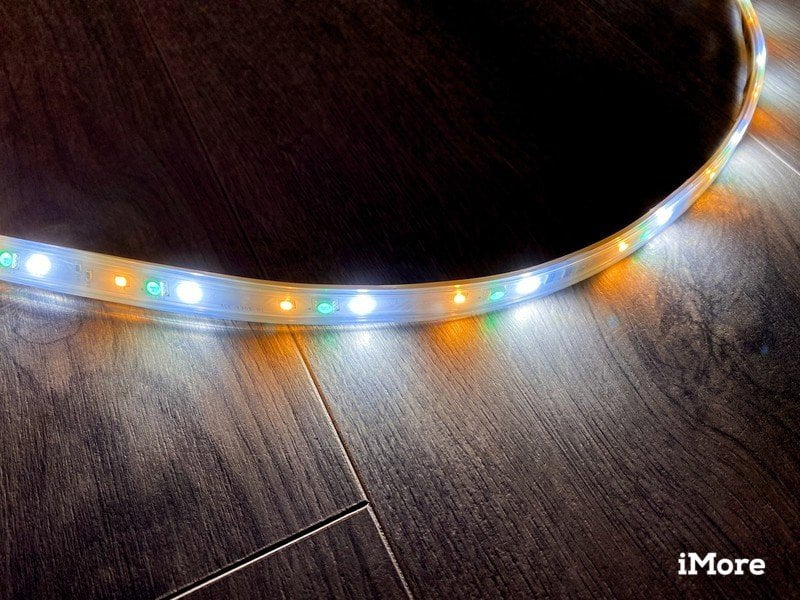 You should buy this if …

You shouldn’t buy this if…

If you debating whether or not the Eve Light Strip is for you, then there are a few things that you will need to keep in mind. First, Eve’s strip is expensive and only works with HomeKit — no Android, Alexa, or Google Assistant support here. The strip also lacks media-syncing and effects that you get with cheaper options. However, if you want a bright HomeKit light strip with excellent color reproduction, then Eve’s strip is tough to beat. Eve’s strip is also one of the few lights that work with HomeKit Adaptive Lighting, so if that is a priority, then it should be on your radar.

In the end, the Eve Light Strip — even with its fair share of limitations and missing features, is still one of the better HomeKit-enabled options on the market. With deep HomeKit integration, the light strip pairs in seconds without going through a registration process, and HomeKit Adaptive Lighting support allows you to experience the latest smart home feature today. Coupled with excellent color reproduction, fast response times, outstanding reliability, and crazy peak brightness levels, the Eve Light Strip is definitely worth the premium price.

We may earn a commission for purchases using our links. Learn more.