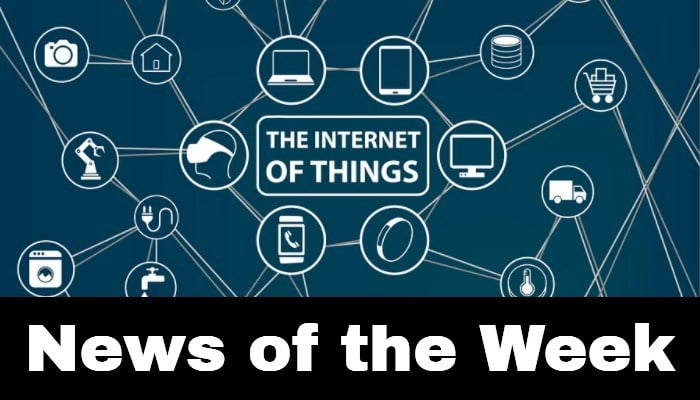 Everything about Eva’s new weather station: Eve Systems this week introduced a new version of the Eve weather station, which costs $ 70 and is available on March 25. What is special about this? Wire compatibility, which brings network connectivity to the mesh and a network of self-healing devices. And Eva is just beginning. On April 6, the wired Eve Energy smart card is available in the US for $ 40. And the second-generation Eve Aqua smart water controller currently available receives a firmware update to enable Thread support. These products and updates will bring the total number of Eve Thread devices to seven, and I’m sure more will come. In the meantime, I’m on my way to reviewing the new Eve Weather device. Stay tuned to see how it works with the HomePod mini, which acts as a Thread router. (Eve Systems) – Kevin C. Tofel

Microsoft Mesh and how AR / VR might intersect with IoT: At Microsoft Ignite this week, the software giant unveiled Mesh, a software designed to manage the creation of avatars and other “sanitary installations” of the AR / VR worlds on different platforms. The emphasis was on games and collaboration; used Pokémon Go and meetings where people were represented by their digital avatars sitting in places with other people’s avatars to demonstrate Mesh. AR and VR have never attracted me very much, but where it could become interesting is when our avatars meet a digital twin of a car, building or products in a virtual space. With quality data from a real-world object, people could interact in a virtual world with a facsimile of reality to take collaboration in product development or repair to new levels. (Protocol) – Stacey Higginbotham

IoT and winter power plants: After the Texas Freeze, I wondered how IoT could have helped prevent natural gas plants from disconnecting, so I emailed Emerson to get an idea of ​​what could have been prevented . Bob Yeager, president of energy and water solutions, Emerson Automation Solutions, sent me an email to say that the sensors alone would not help. However, sensors that could control the heating strips along cabinets or pipes would have been useful. He also mentioned that having a ubiquitous layer of sensors during a refining or generation process could provide early warnings before the failure swallows an entire installation. Combining this detection with actuators that could help keep critical areas warm would lead to what Yager called “proactive maintenance.” – Stacey Higginbotham

The hippopotamus will become public through a SPAC: Hippo, which is building a modern home insurance business that will rely on connected sensors and smart home technology, has agreed to go public through Reinvent Technology Partners Z, a SPAC created by Marcus Pincus (founder of Zynga) and Reid Hoffmann ( LinkedIn founder). Hippo offers home insurance in 32 states today, allowing users to receive their offers through the web and an application. In many states, it also offers discounts for users who have or accept certain smart home devices, such as security systems or leak sensors. I remember in 2014 talking to a venture capital friend about how high prices and misuse of many smart home devices didn’t fit consumers’ requirements, but that insurers should be happy to sink. It took longer than I thought smart home gadgets would change the world of insurance, but Hippo is one of the companies that will take us there. (Hippo) – Stacey Higginbotham

Noonlight brings 24/7 security monitoring to Tuya smart devices: You may not be familiar with Noonlight, which provides connected security APIs to partner companies. But this week, the big provider of cloud IoT platforms, Tuya, became the latest pairing with Noonlight. As a result, Tuya gains access to permanent monitoring of sensors and video services on smart devices, and any “Powered by Tuya” application or device can be connected to Noonlight APIs and emergency dispatch teams. The new partnership not only expands Noonlight’s business potential, but also provides another revenue stream opportunity for Tuya and its brand partners. Hey, not every smart device company can work with ADT, Alarm.com and the like. By the way, Wyze Home Monitoring also uses Noonlight services, starting in May 2020. (Tuya) – Kevin C. Tofel

Azure Precept is Microsoft’s latest product: Microsoft at this week’s annual Ignite conference unveiled Azure Precept, a fully connected game of hardware and services – though Microsoft partners will create first, with Asus first. The idea behind Azure Precept is a simple one: bring AI to the edge and make it easier. A new development kit includes hardware and “embedded hardware accelerated AI modules” for vision, while an optional audio supplement brings localized voice recognition. The goal here is to accelerate AI on product development and eventual implementation, to bring localized AI wherever it is needed. Of course, all of these are integrated with the Azure IoT Hub for easier management and provisioning. (Microsoft | AI blog) – Kevin C. Tofel

Connected pet collars can raise a lot of capital: This week, Fi, the maker of a pet collar that uses Wi-Fi and Bluetooth for tracking, raised $ 30 million in a second round of funding. Fi collars warn pet owners if their pet wanders outside a geo-fenced area. The company says it has raised money to expand the availability of products with additional retail and marketing channels, as well as research. I hope that some of this research and development will be used to analyze LoRaWAN technologies or maybe even Amazon Sidewalk. Once a pet exceeds the limited access to Wi-Fi or Bluetooth, the larger range of LoRaWAN would be useful. (TechCrunch) – Kevin C. Tofel

Speaking of HomeKit, I like this smart socket with two sockets: Our family’s latest purchase is the $ 21 Meross HomeKit Dual Plug smart Wi-Fi socket, which we reviewed this week. I had some challenges adding the HomeKit jack to my home network, as the device uses 2.4 GHz Wi-Fi signals. Still, after that hiccup? Perfect. This connector turns a wall outlet in two. But the best part is that you can control the two sockets simultaneously or independently. (Stacey on IoT) – Kevin C. Tofel

Forget about mesh networks; how about wearable mesh sensors? When I read about these wearable sensors, I immediately thought of Google Project Jacquard technology. This is the interactive technology built into clothing and accessories that wearers can use to control their connected phone. Cipher Skin mesh sensors can also be introduced into clothing, but they do much more. By reading “billions of data points”, the company can create a 3D model of anyone carrying material embedded in sensors. Think of shorts or compression shirts, for example. Biomechanics, heart rate, blood oxygen saturation and much more can be deduced from sensors. This is useful for rehabilitation and training activities. The Boyett Group must also think, as it led a $ 5 million round of Series A funding for Cipher Skin this week. (VentureBeat) – Kevin C. Tofel

The smart city infrastructure needs a rethink: This month’s column for IEEE spectrum it’s about how I think we should build and finance the technology behind the smart city. Yes, I mention bonds. (IEEE spectrum) – Stacey Higginbotham