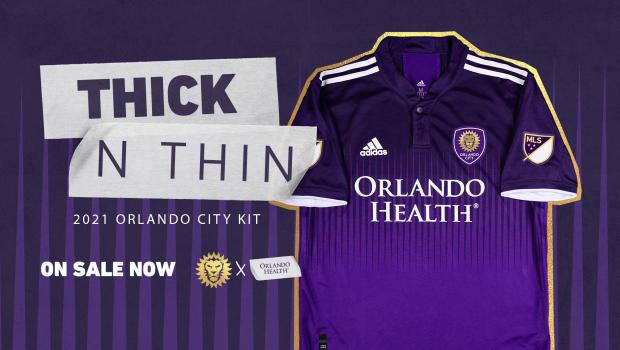 ORLANDO, Florida (March 5, 2021) – Orlando City has unveiled its latest kit with the Thick N Thin Home 2021 kit, its latest addition to its collection. A representation of the transition to a new era, the new Thick N Thin 2021 kit celebrates the most loyal fans in Major League Soccer. The T-shirt is inspired by the city’s unwavering and irreversible fans and the way the Orlando community exemplifies endurance through thick and thin, ups and downs, rain or shine.

The new kit is now available for purchase on OCMobileShop.com or in person at The Den at Exploria Stadium starting at 10 ET on Saturday, March 6th. The first 200 fans who purchased the Thick N Thin kit from OCMobileShop.com, from the Launch or on the spot at the launch of the club’s City Art Jam kit will receive an exclusive CITYiD patch and access to an Exploria Stadium tunnel tour March 6. The tunnel tour will allow fans to take the same walk on the field as players wearing purple City, culminating in a photo opportunity on the field. In addition, the new t-shirt is also offered through MLSStore.com team partners.

“This is not just a shirt that the team should wear on the field. This is a t-shirt that our fans proudly wear, here in Orlando or wherever they are, which is the dedication and strength of our community, ”said Alex Leitão, executive director of Orlando City SC. “Orlando has been tested, both on the field at Exploria Stadium and in our neighborhoods, but every time we gather and come out stronger on the other side. We are proud to be a fabric that connects this city, something that our fans can rely on in difficult times, and this kit is a thank you to all those who supported us regardless of the circumstances, through Thick N Thin. ”

The Thick N Thin kit features dark, light shades of purple that separate the top and bottom halves of the shirt, referring to the old and the new, while the thick, thin lines mark the transition and celebrate the unconditional loyalty of those who wear it. On the back of the neck is the flag of the state of Florida, while Jock Tag hosts the phrase “Through thick and thin.”

Visibly displayed again on the front of the shirt is the club’s presentation partner and the official medical team, Orlando Health. This season will mark the 11th consecutive year of partnership, in seven MLS campaigns and four USL campaigns, which Orlando Health is presented in both home and away kits.

“Orlando Health is the cornerstone of our community and has been an amazing partner on this club since day one. We are always proud to have their names on the front of our kits, but even more so given the challenges we have faced in the last year, “added Leitão.” When we talk about support through Thick N Thin , our friends at Orlando Health are the true definition of this and we are very excited for another season with them. ”

The kit was unveiled at the second edition of City Art Jam, presented by Orlando Health. During the event, a mural by team captain Luis Nani was painted live as part of the revelation, while eight local artists participated in a speed art contest hosted by the No Borders Art Competition, creating unique works of art. which will be made available for auction. with a portion of the proceeds to the benefit of the Orlando City Foundation.

Lions have begun preparations for their seventh MLS campaign, with pre-season training underway at the Orlando City SC Training Ground at Osceola Heritage Park. With almost six weeks to prepare, the MLS 2021 season is set to begin the weekend of April 17th.