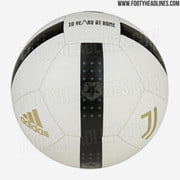 Footyheadlines has released the Juventus shirt for the 2021-22 campaign and a special patch to mark the 10th anniversary of Allianz Stadium.

The old lady will return to more traditional black and white stripes from next season.

There will be black and white block stripes, interspersed with the white inscriptions of the J logo, Adidas and the main sponsor of the Jeep shirt, while the stars above the logo are golden.

Footyheadlines previously released another version of Juventus’ home shirt for next season, which was similar to this one, but with golden letters of the J and Adidas logos.

The site also showed a special patch, which appears in one of Juventus’ official football matches, which marks the 10th anniversary of Allianz Stadium.

It was inaugurated on September 8, 2011, by President Andrea Agnelli and the first game was against Notts Country, the club that inspired the founders of the old lady with their black and white shirts.

“10 years at home”, he writes on football, with “A” stylized for “years” to represent the iconic arch of the Allianz stadium.