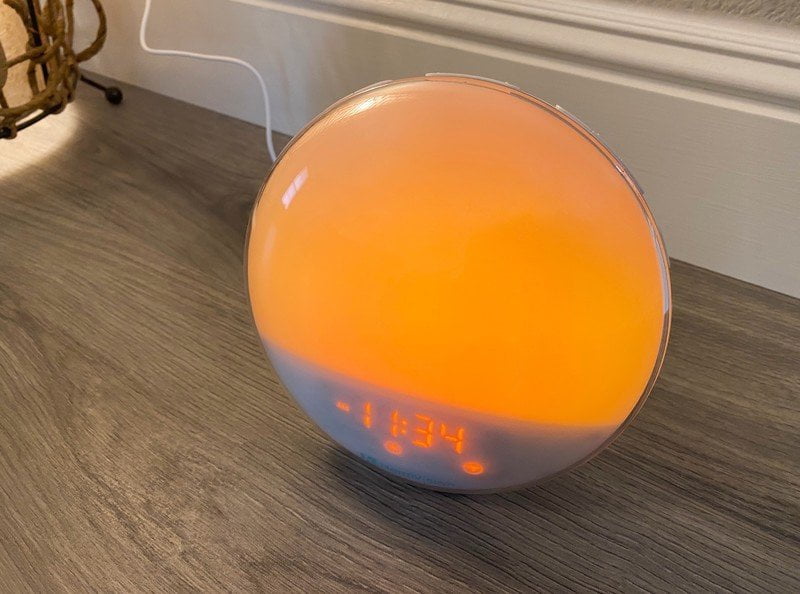 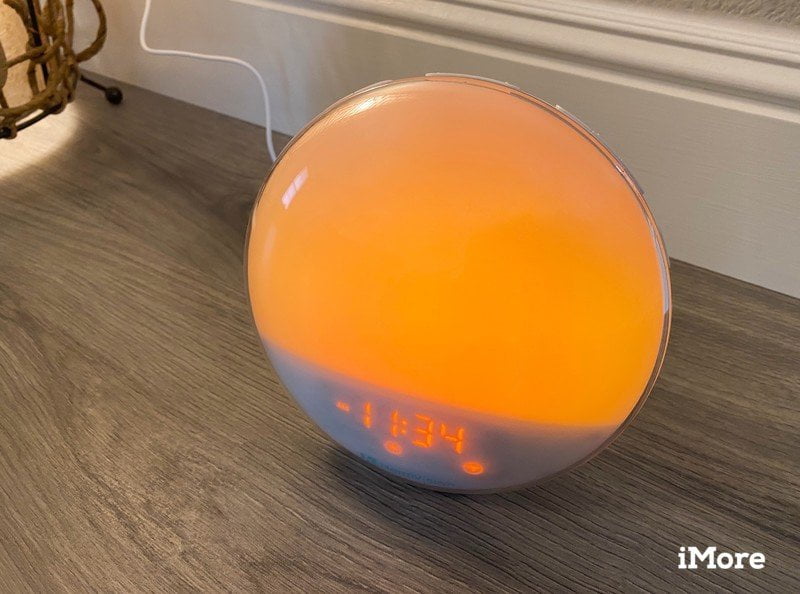 Wake-up lights are slowly but surely becoming apart of the nighttime routines of many, thanks to their ability to replace the jarring alarm tones of the past with gentle, warm lighting that eases you into the day. While there are now more options to choose from than ever before, the best Philips wake-up lights can set you back quite a bit, and other solutions like smart lights that emulate the wake-up effect through features like HomeKit Adaptive Lighting lack the basics like an always-on clock.

That is not the case with the HeimVision Smart Wake-Up Light, as it combines wake-up light functionality, smart connectivity, and loads of extras, with an incredibly affordable price tag. I have been testing out HeimVision’s light for the past few months in my home, and I love how just one small accessory replaces the need for an alarm clock, lamp, phone charger, radio, and sound machine, allowing me to reclaim the precious space on my nightstand. 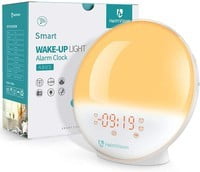 Bottom line: HeimVision’s wake-up light combines all of the bedtime essentials into one incredibly smart — and affordable — package. With gentle wake-up lighting, sleep sounds, USB charging, integrated radio, color capabilities, and smart controls, this loaded bedroom accessory can do it all. 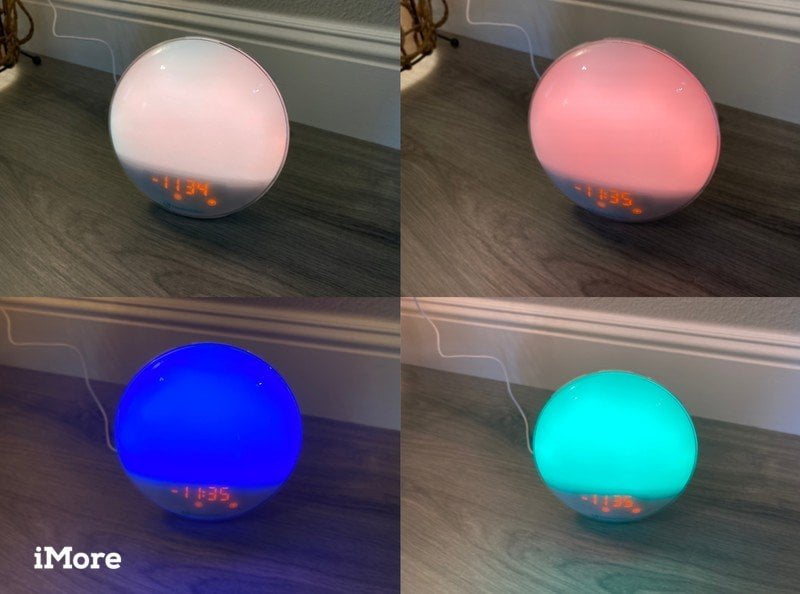 The HeimVision Smart Wake-Up Light features a playful design, with a large round diffuser taking up the majority of the glossy white and clear plastic front. The Smart Wake-Up Light looks much larger in pictures than it does in-person, with measurements of around 6.5-inches both in height and width and just 2.8-inches deep, which is a great size for almost any nightstand or for a child’s room.

Underneath the diffuser is an LCD presenting the time and active modes in a soft amber-like tone, and surprisingly, it can actually be turned off, which is awesome. Around the edges of the light are a series of buttons, 11 total, keeping the entire package looking clean while still providing tactile controls for everything. Around the back is a single 5V/1A USB-A port, non-removable FM antenna wire, speaker, micro-USB port input for power, and underneath is a compartment for a coin battery for backup purposes, which is included. 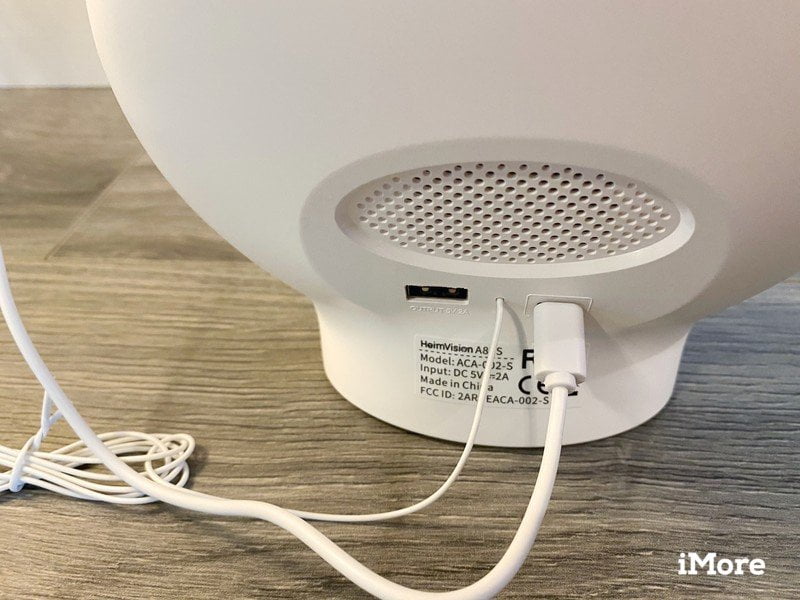 The integrated LCD clock and speaker allow HeimVision’s light to act as an alarm and sound machine with several built-in presets, and the FM antenna, of course, enables it to play your local stations. While it isn’t the highest or fastest output around, the USB port on the back is handy as it can be used to charge phones and removes the need for yet another charger block. Needless to say, I absolutely love how a single accessory can replace several bedroom essentials as it frees up precious space on a nightstand and how it reduces the number of devices to manage at bedtime. 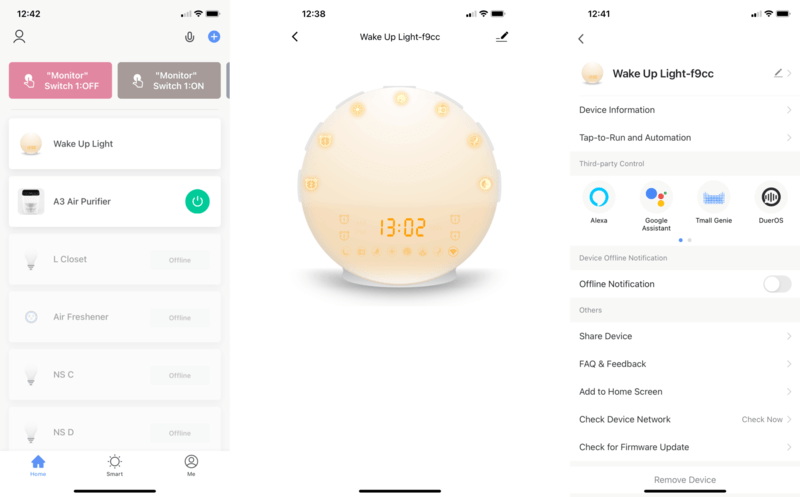 The star of the show, though, is the onboard light, which shifts between several different color temperatures and brightness levels to gently wake you up at your desired times in the morning. The light features 20 different brightness settings and is plenty bright enough to serve its purpose, although its effectiveness, like with wake-up lights in general, is truly personal. The light also works as a mood light with the ability to display various colors, all of which look rich and vivid — especially darker hues like blues, which are stunning with the orb-like design. 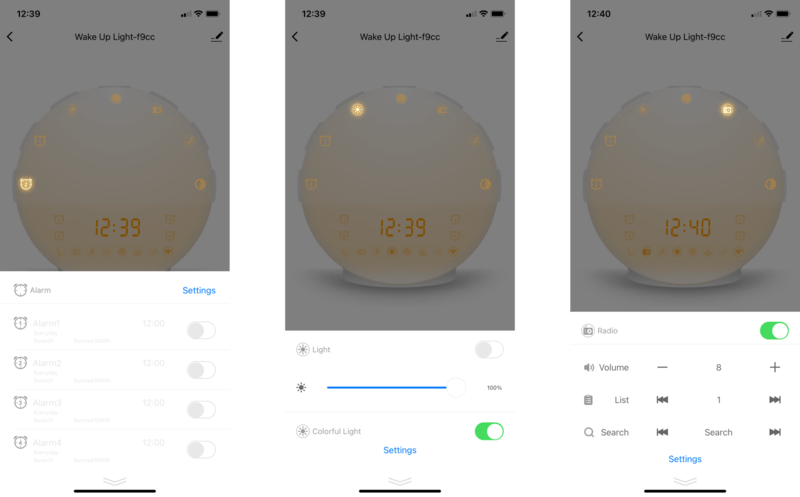 Finally, the HeimVision Smart Wake-Up Light includes a 2.4Ghz Wi-Fi radio, which opens it up to app and voice controls through the Smart Life app available on iOS and Android without a separate hub. Being a smart home enthusiast, I love how you can set the time and alarms, create schedules, adjust brightness levels, switch between colors, change radio stations, activate sleep sounds, and use it with other Smart Life accessories all via the app. I also love how the light can be used with Alexa, the Google Assistant, and Siri through Shortcuts, providing even more automation potential.

HeimVision Smart Wake-Up Light review: What I don’t like 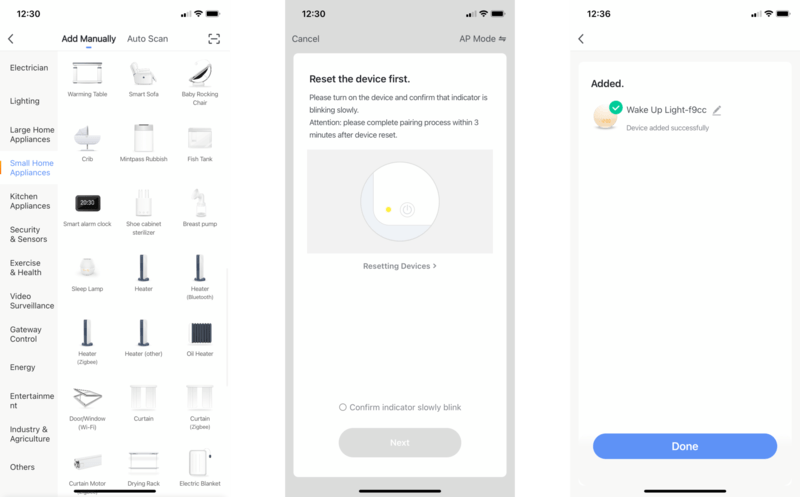 Like most low price smart accessories found on Amazon these days, the HeimVision Smart Wake-Up Light relies on the Smart Life app and only supports 2.4Ghz Wi-Fi. The Smart Life app is designed as a catch-all that doesn’t focus on one accessory type and features two ways to pair devices, so if you don’t read the included manual, miss the automatic pairing option, or if the option doesn’t work, you will run into some problems. Since I have had issues in the past using the automatic process with other accessories, I chose the manual route. 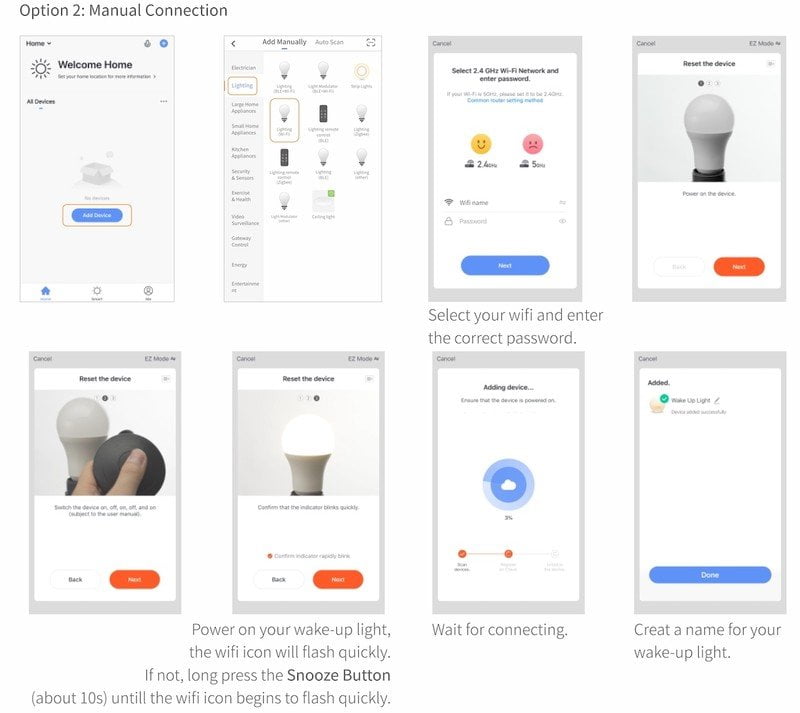 Through the manual method, you are expected to select the appropriate accessory type from a massive list, and you will ultimately find two potential options presented for the light: Smart Alarm Clock and Sleep Lamp — neither of which sport an icon that matches the HeimVision light. However, according to the images in the manual, you are supposed to select “Lighting (Wi-Fi),” which is represented by a light bulb in the app. Then after selecting the correct option, the app tells you to perform a hardware reset, which — you guessed it — doesn’t resemble the actual process for the wake-up light. The manual provides the correct reset process, albeit underneath a set of screens showing the wrong steps, and things are pretty straightforward after this portion. 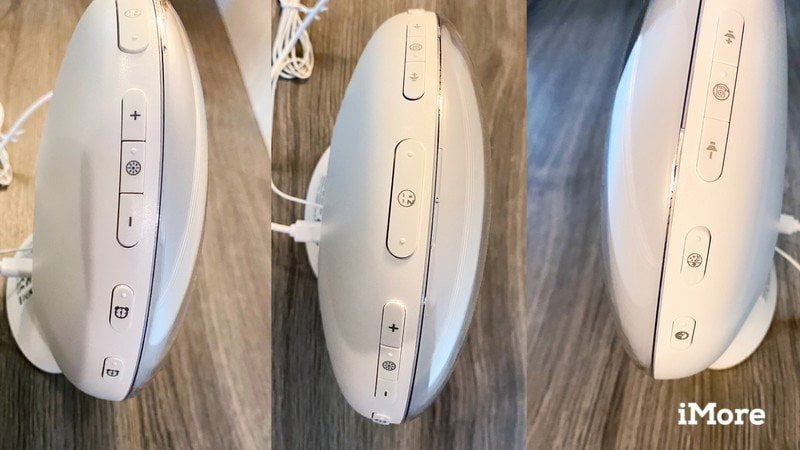 Moving over to the actual hardware, with the sheer amount of features available on HeimVision’s light, switching between modes and setting alarms on-device can be a little confusing at first. Whether it is trying to figure out what each icon on the various buttons mean or trying to decipher the abbreviated words and symbols on the LCD display, getting acclimated to the light will take some time. Another hardware complaint that I have is that the light isn’t bright enough to truly fill a room or replace a lamp. I was unable to track down a brightness rating for the light, but if I were to guess, I would say that it probably tops out at around 300 or 400 lumens.

My final complaint is with regards to the lack of HomeKit support, which, while not unexpected, is still frustrating for those that like to have everything available in Apple’s Home app. I would love to be able to control the wake-up light through the Home app or use it in automation with other HomeKit accessories, but unfortunately, it simply isn’t available. As previously mentioned, you can use the light with Siri, but that is only through Shortcuts, which I have found to be incredibly inconsistent with a variety of accessories — especially if you try to run commands via a HomePod. 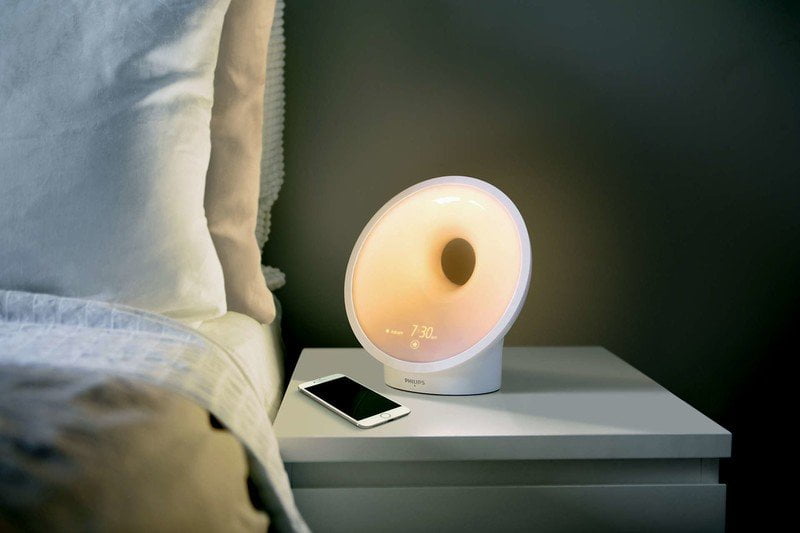 While gaining popularity over the past few years, smart wake-up lights are still a rather niche category, limiting available options. The most popular option, the Philips SmartSleep Connected Wake-Up Light sports a price tag that is over three times the price of HeimVision’s offering but has an almost identical feature set. However, Philips positions the SmartSleep Connected as a true sleep solution with “clinically-proven” results provided by features like ambient environment monitoring and breathing guides.

Another popular smart wake-up light is the Hatch Restore, which, like the Philips SmartSleep Connected, focuses more on delivering better sleep rather than trying to do everything and is quite a bit more expensive at $130. The Hatch Restore features a cleaner overall design, and the same applies to the accompanying app since it strips out all of the other smart home accessory types. The Hatch Restore lacks an integrated FM radio tuner, and it locks some of the more advanced sleep features behind a subscription, so the cost of ownership only gets higher.

The closest low price competitor to HeimVison’s light is the Corlitec Smart Wake Up Light Alarm Clock, which looks almost identical, has the same feature set, and the same price tag. The Corlitec wake-up light even works with the same Smart Life app, so I wouldn’t be surprised if the same manufacturer made both lights. Regardless, the Corlitec light does have a different stand or base, opting for a leg look versus the bulkier bottom of the HeimVision wake-up light. 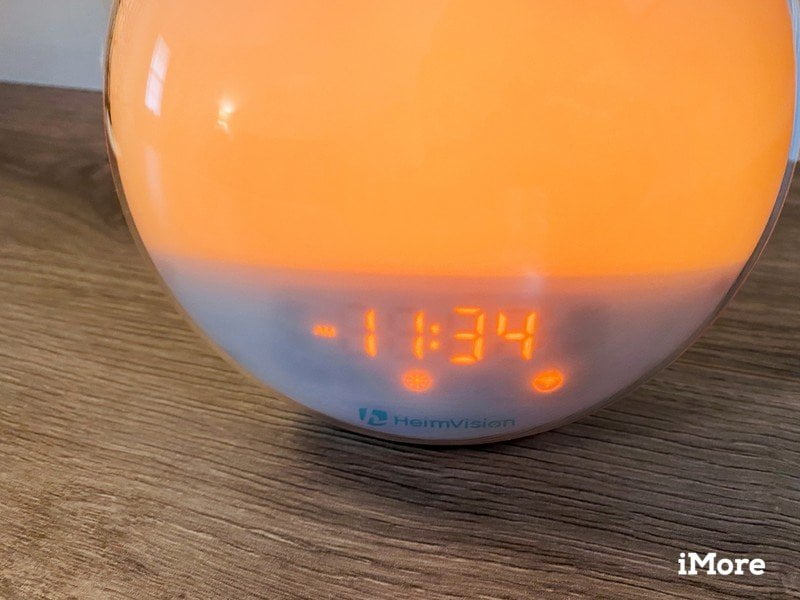 You should buy this if …

You want an affordable wake-up light

At just under $50, the HeimVision Smart Wake-Up Light is an affordable alternative to the popular lights from brands like Philips. In some cases, HeimVision’s light is easily two to three times cheaper while providing more features.

You want a wake-up light that fills several roles

With the ability to play various sleep noises, onboard FM radio capabilities, colorful lighting, and a digital clock display with alarm, HeimVision’s wake-up light can fulfill several nightstand roles in one compact package.

You want a wake-up light with app and voice controls

Every aspect of the HeimVision Smart Wake-Up Light is available through the Smart Life app for iOS and Android. Voice controls via Alexa, Siri, and the Google Assistant make quick adjustments like changing up colors conveniently.

You should not buy this if …

While having a full suite of features in one device is nice, actually making adjustments or switching between modes on-device can be a little confusing at first without clear labeling. If you want just a simple wake-up light with as few buttons as possible, then look elsewhere.

The integrated LED light inside the wake-up light isn’t the brightest around, so don’t expect to use it as a full-blown lamp replacement. The HeimVision light is better-suited for mood lighting and for as an aid late-night runs, but not as a room-filling lamp.

You want a smart wake-up light that supports HomeKit

Despite having support for Siri Shortcuts, the HeimVision Smart Wake-Up Light doesn’t work with Apple’s HomeKit. Shortcuts can accomplish many of the same things as HomeKit, but it will take some work to get everything set up.

If you are in the market for an affordable wake-up light or are just looking for a smart alternative to traditional bedroom devices like an alarm clock, then the HeimVision should definitely be on your radar. HeimVision’s light is an incredible value with the ability to act as a clock, sound machine, mood light, radio, and phone charger, all in a package that costs under $50. However, if you value simplicity or only want HomeKit-compatible accessories in your smart home, then the HeimVision light isn’t the one for you.

With a slick design, smart controls, colorful lighting, affordable price, and more, the HeimVision Smart Wake-Up Light is an excellent addition to almost any bedroom or nighttime routine. HeimVision’s loaded light can replace all of the nighttime essentials: alarm clock, sound machine, bedside lamp, radio, and phone charger, making it easy to recommend for someone who is in the market for an upgrade — smart or not. Even if you doubt the effectiveness of the actual wake-up light functionality, the sheer amount of features and the compact size still make the HeimVision Smart Wake-Up Light an incredible overall value.

Bottom line: With an affordable price, smart app controls, and the ability to replace several essentials in one convenient package, the HeimVision Smart Wake-Up Light is an excellent addition to any bedroom.

We may earn a commission for purchases using our links. Learn more.