In today’s globe, there is no getting away from the reality that the air we breathe is more polluted in many areas of the globe than we care to acknowledge, and as such we need to maintain a close eye on pollution concentrations in the home as much as outdoors, if not more. In specific, many individuals are misunderstood that it is not enough to simply close your windows to safeguard yourself against PM2.5. If you don’t know what PM2.5 is (particular matter of 2.5 micrometers in size) very, very good matter which can get very deep into our lungs and then into our bloodstream, causing a lot of irreversible harm over time.

I’m not going to get into the details because it’s pretty sobering, but if you’re interested, check the Wikipedia entry for more information.

So while there are plenty of things you can do to assist mitigate the impacts–for one, air purifiers–it’s always nice to understand when concentrations get greater than they should, and that’s where tools like the Koogeek A1W Environment Monitor can assist. It has sensors to pick up both PM10 and PM2.5, as well as temperature and moisture sensors–elevated or low humidity remaining unchecked can actually trigger health issues. It also has other sensors that I’m going to touch on later, but unboxing for now.

UNBOXING
I checked the Koogeek FL1 Fingerprint lock a brief while ago and I mentioned that a copy of the homeKit code was stuck to the outside of the box, which, to say the least, was a bit odd. Well, they have done it again with the A1W! I can’t see the logic of doing this when they could stick it to the inside of the lid just as readily as Vocolinc does. Apart from this anomaly, the packaging for the A1W is similar to the FL1, with the same general layout; the product on the front in a minimal manner, along with the HomeKit badge, and the specs on one side, with the icons for each feature on the other hand;

I’m going to come back to them soon, but there’s a lot to sell to a casual shopper.

Koogeek wisely chose very thick, impact-resistant foam rubber to fully enclose the device after opening the box, as with the Smart lock. This is fantastic because it protects something much more delicate than a padlock, with many sensors inside. You get the device itself after lifting the tiny circle of foam rubber, finish with a film protective screen. All right so far!

You will discover the handbook below the first primary foam stage, complete with HomeKit code (the second of three). The handbook is converted into six languages–Chinese English, French, German, Spanish, Italian and Simplified. Underneath is a USB-to-micro-USB cable and a USB energy supply that looks pretty bland and inexpensive. The A1W has a built-in battery, so you don’t always need it to be plugged in constantly, but given the number of sensors it contains, the battery won’t last too long, so if necessary, it’s better to maintain it powered continuously. The basic energy specs are as follows:

THE DEVICE
On first impressions, the device is quite similar in many ways to my current PM2.5 monitor, the Kaiterra Laser Egg 2, although the Laser Egg 2 has a larger rear section, almost like the old iMacs, while it’s flat on the back, which is why the kickstand was built. With each box and handbook having a HomeKit code on them, you will find the third example of the code on the back of the unit, where you will also see the micro-USB port for charging / powering the device. The screen at the front of the device measures approximately 65mm/2.8 in diagonally across. It is nowhere close the quality of the retina, but it has color and does the task of showing the information sufficiently well. The unit has an integrated fan that samples the surrounding air around the display circumference through the front and ejects the sampled air through the rear vents.


The front of the device also houses the touch button below the screen, which turns on the screen when shortly tapped and changes the main number to switch between the level of PM2.5 and the current temperature. When you click the button, the other levels will alter accordingly. Three sensors are located above the screen, including the sound sensor, a big motion sensor, and an ambient light sensor.

The screen itself displays all the data in one place, so you have the lux levels for ambient light at the top of the screen, the sound levels in dBs, a motion sensor icon that turns red when motion is detected, 24hr mode time, a wifi icon and a percentage level of the battery along with a color battery icon. As already stated, the primary number in the center is the PM2.5 or temperature level. You will see the PM10 rates, the temperature (in Centigrade or Fahrenheit) and the moisture levels at the bottom of the screen (if you have the primary amount set to PM2.5).

If you press the button for a long time, you will have access to the settings section along with a few extra characteristics setting ;

The other settings are for language, factory settings reset and motion threshold, which is the amount of time before the motion sensor resets to ‘ no motion. ‘ The choices are 5, 15, 30 and 60 seconds, 5, 10 and 30 minutes

INSTALLATION
This was mounted straight through the Home app and then opened up to check for any accessible firmware updates in Koogeek’s own HomeKit app, for which there was none. Once installed, the A1W will produce six separate tiles representing PM2.5/PM10, Humidity, Ambient Light, Motion and Temperature in the Home App, with the sixth tile being the Night Light. Of course, that’s just 5 detectors, with the sixth sensor sounding, but because HomeKit doesn’t help sound sensors in iOS12, there’s no tile for it.

The sound sensor produces a distinct tile in the Koogeek app, but if you press any of the seven tiles representing all the sensors cited, including the night light, you get to the same settings section, which lists each sensor together with the appropriate settings for each. However, the sound sensor has no configurations that you can alter, so it seems fairly useless at this stage, and even with the introduction of iOS13, there still seems to be no support for sound detectors in the betas that have been published so far, so all you can get from the sound sensor tile in the Koogeek app is the decibel levels.

IN USE
I’ve been testing this for about 10 days now, so I think I got pretty good use of the device. I made a few observations about the device; first of all, the temperature and humidity sensors usually seem to work well and are within an acceptable margin of mistake compared to other sensors measuring these two metrics. With the light sensor, it’s hard to know if it accurately measures the light, though it reacts instantly when, for example, I turn off the lights or cover the sensor, so I know it works. For me, measurements of ambient light need not be spot on, down to the individual lux points, so that’s not a problem.

The front of the unit also includes a ring of LED light around its circumference, and when you press the night light tile in the Home app, it will turn on (in white). This will also switch on the screen, which will only remain on for about 60 seconds at a moment. Pressing the tile turns on and off the light, even if turning off the night light does not switch off the display.

This ring of LED lights also serves as a visual indicator of PM2.5 concentrations; if the PM2.5 concentrations are between 0–35, according to the handbook, the ring should be green, but it never is, and I have not seen the ring once as green. It will go to orange between 36-75, the light will turn red between 76-115, and it will be purple for levels from 116 upwards. I can say it operates after testing the sensor, although the reading was distinct in testing from the Laser Egg 2. If you have the primary display in the center set to temperature when the temperature is 29 degrees C or above, the ring will also turn orange.

As already mentioned, when it comes to the sound sensor, it won’t be very useful right now, although in some 3rd party apps you can access the sound sensor and possibly set up an automation, although I’ve tried one app already and it just didn’t work.

I found it very sensitive when it came to the motion sensor, and sadly there seems to be no way to adjust the sensitivity in the Koogeek app. You can of course use the movement sensor to operate at only certain moments of the day, if you need something that can pick up movement, but I also found that while it can be delicate, it can sometimes also miss movement, so I’m not completely sure that it will be of much use other than turning the screen and night light on in dark regions–just make sure you set an automation not to turn the screen or nig.

There have been some early reports of people finding the built-in fan to be too noisy, and on that basis they have returned their units, and I can say you can hear the fan, even though I personally don’t find it annoying at all, but that’s up to the person. Where I am, next to the Keelung River, Taipei, there’s plenty of noise from both insects and humans, and since it’s hot and humid for a lot of the year, we either have the AC or some fans on at night, not to mention the air purifier, so I don’t really notice it.

SUMMING UP
I’m happy that I bought the unit, if for no other reason than I love my HomeKit gadgets (if you haven’t noticed…), and I already have an Eve Room (1st gen) capable of reading temperature and moisture, as well as VOC levels that the A1W can’t, a Kaiterra Laser Egg 2 for PM2.5 levels, and a Mijia multi-sensor covering PM2.5, VOCs, temperature, humidity, and carbon dioxide levels, so I’m already w. However, getting me a better concept of pollution is another tool, and living in Taiwan is sadly a large problem. It would be the Laser Egg 2 if I were to compare it to the most comparable product of the two other instruments listed.

I’ve been using this product for almost 18 months now, and I like you to see the average PM2.5 levels for where you are, compare with indoor concentrations, and have an app that enables you to customize the screen and set the Air Quality Index (AQI) standard to either China, the US or India, none of which can be done by Koogeek. I would think that the A1W was calibrated to Chinese standards on this stage, but that’s just a guess, based on the distinct figures I see between the two machines. That being said, it’s a little bit cheaper than the Laser Egg 2, and it has more pricing features, so for you it’s a throw on more sensors or more reliable measurements 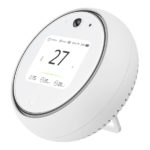