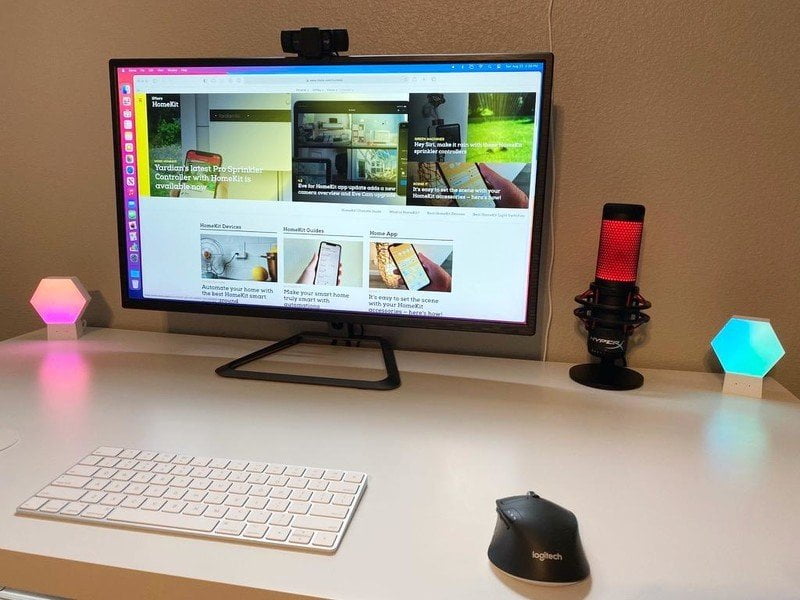 As with HomeKit cameras, HomeKit lighting has gained significant momentum in the last two months, with the introduction of two new light panel systems. Although the colorful, decorative HomeKit lighting is certainly not new, the shapes of the latest offerings are: hexagons. For whatever reason, the hexagonal lights activated for HomeKit were not simply a thing for the first years of the platform’s life, but now, all of a sudden, we have two.

First of all, it was the Nanoleaf Shapes series of panels, which I thought was an excellent entry into the product line for their ease of installation, sensitivity to touch and well, just as nice looking. The next thing is LifeSmart Cololight Plus, which I’ve been testing in my house for the past few weeks. Even though they have a similar shape, Cololight Plus and Nanoleaf Shape vary drastically in several key areas: price and capabilities. With Cololight Plus coming with kits starting at up to $ 25, we’d expect it to offer a lower-end setup, application, and lighting experience, but surprisingly, that wasn’t the case at all.

Bottom line: LifeSmart Cololight Plus offers beautiful, dynamic scenes and colors that really go from the edge. An affordable price tag, HomeKit support and almost endless extensibility make Cololight Plus a great way to add a little color to your home.

LifeSmart’s Cololight Plus comes in a variety of starter kits, the most affordable edition consisting of a single panel and the important controller, with which I started testing the system. The regulator acts as a base for the panels, with all the smart elements filled inside the tiny white frame and attaches to each hexagon through a small detachable connector. The base has a single button on the front, which acts as a power switch and as a way to scroll through a series of pre-programmed scenes.

Around each side of the button are a few small holes, one of which is a microphone that allows the system to react to music or noise in a room, and the other hides a reset button inside. At the back is a detachable USB-A power cable that can handle up to 10 panels, although additional power sources can be used for further expansion, reaching up to 255 panels in total. Although a USB connection powers the Cololight Plus, unfortunately, LifeSmart does not include an electric brick in the box.

The actual light panels themselves are quite small, measuring 3.4 “x 2.9” x 1.2 “and weigh only 0.12 lbs each. The panels are constructed of a mixture of plastics, with the front having a slightly frozen appearance but hiding Internal LEDs Inside: Inside the panels are a series of 19 LEDs that give Cololight Plus the ability to display multiple colors on a single light.The panels support the industry standard of displaying 16 million different colors and shades white, along with darkening functionality.

On the back of the panels is a set of six ports for the connector parts on each side of the hex and one that includes an additional connector that supplies power from a base unit. The panels can be wall mounted with a separate plastic part that attaches to the back of the panels, but is not included in the starter kit or additional panels. The additional wall panels are sold in simple packaging, as well as in three and six packages, giving owners an affordable way to expand as needed, which I did after setting up the original package.

Connecting Cololight Plus to a home network takes place via 2.4 gHz Wi-Fi, without the need for a dedicated hub. Cololight Plus works with the Cololight app, available for free in the iOS and Android App Store via Google Play. In-app controls include the ability to go through scenes, set solid colors, and switch power. Custom scenes can be created by the app, with handy presets available, which display various animations or movements that the panels are capable of, and the scenes can include different speeds and, of course, colors.

In addition to the Cololight app, the system works with all major smart home platforms: Alexa, HomeKit and Google Assistant. For Apple HomeKit users, the panels can be configured entirely through the Home app, bypassing the need for an app entirely if you wish. The Cololight app also includes a guest mode, which allows HomeKit users to access firmware updates, adjust scenes, and even create scenes, all without registering for an account. However, for those on Android, registration is required for smart controls and remote access.

Since Cololight Plus is HomeKit enabled, setting it up was an easy breeze. Once disconnected and connected, all it took to connect is a scan of the HomeKit association code. Of course, the direct association with HomeKit limits you to the standard color options shown in the Home app, but is immediately available for use in automation with other accessories and scenes. Even though it is limited in this state, I love the way Cololight includes several different built-in light scenes, which can be accessed by pressing the button in front of the base, which makes the whole package easily accessible to almost everyone.

Speaking of light scenes, the ones included right out of the box are fantastic. Combined with the inclusion of several LEDs inside each panel, certain light scenes are truly dynamic, with effects such as breathing and swirls, which incorporate different shades throughout the surface. I especially like it Instashare scene, which moves quite quickly pastel colors from the bottom of the panel to the top. The effect is amazing to see in person and is my goto scene when I’m at my office. The color reproduction was good, although, as with all light panels, it struggles with certain colors such as green or red, but it ends.

I especially like the Instashare scene, which moves the pastel colors from the bottom of the panel to the top pretty quickly, which is amazing to see in person and is my goto scene when I’m at my desk.

As mentioned, the colors and scenes use the front of the entire light panel, thanks to an almost invisible light at the edges. Unlike the hexagons recently launched by Nanoleaf, which have visible spaces in each corner and in each of the panels, the gap on the Cololight panels is extremely small, giving it a more perfect look. Cololight panels also produce uniform lighting, even in the corners, another area where the most expensive Nanoleaf shapes struggle. To be fair, Nanoleaf’s lights are touch sensitive and slightly two to three times thinner (and larger) than LifeSmart panels, but it’s still impressive to see in a device that starts at a low price.

Sticking to the design, I like the modular nature of the Cololight Plus and how you can buy as little as possible a panel with a controller to get things started. For testing, I started with a single set of panels and then purchased a few additional panels to get a better sense of how they connect. Connecting each additional panel is super simple, and the connector parts are rigid and solid. Each connector clicks satisfactorily when set in place, and because of their thickness, I had no fear of breaking when expanding or making changes.

While I like that Cololight Plus can work on a flat surface with its base included, there are a few tiny aspects that generate the experience on the table. Despite the lightness of the panels, the base will shrink if your design is not evenly distributed. For example, if you start with one panel at the base, then add another to the left or right, it will tilt in that direction. Sure, you could attach the base to the surface if you really wanted to with some sort of mounting tape, but it would have been nice to see a suction pad on the bottom or just extra weight inside.

Also, the base is not as sleek as the regulators on the Nanoleaf shapes mentioned above and will no doubt look a little weird if mounted on the wall. Wall mounting itself is another problem, as the proper hardware is not included in the box and I could not find a place to buy the necessary parts. With the ease of the panels, I could see that the tape is a viable option for wall mounting, but I would prefer a more permanent solution if I put it on the wall. That being said, however, I intend to use Cololight panels strictly as a desk light, as they seem to me to be a little too thick.

The Cololight app, like most device manufacturer apps, isn’t exactly great. Navigating the application is frustrating with unmarked buttons and inconsistent response times. Just finding the option to set custom colors or patterns was difficult because it was buried in the same screen that acts as a quick menu to jump between scenes. Changing scenes through the Cololight app was hit or failed, some cases took effect instantly, and others never applied, showing instead a message that the light was not responding. Simply making the change again would solve the problem, but the inconsistency was annoying.

Light control through HomeKit and the Home app has provided a familiar rescue, but again, it’s very limited. Through the Home app, Cololight is presented as a single accessory, no matter how many panels you have. Any change in color or brightness you make will apply to the entire set of panels, which means, of course, that you’ll need to use the Cololight app for anything but simple adjustments. I found that setting a scene or color through the Home app worked every time, so I’m not really sure why the Cololight app fought.

Despite its smaller size and lower prices, LifeSmart Cololight Plus is a great alternative to Nanoleaf’s popular smart lighting line. With kits starting at just $ 25, the LifeSmart offer is great for those who have always wanted to try a light panel set up, but didn’t want to commit. The modular nature of the panels offers the option to expand as needed, and the included base allows them to go where Nanoleaf panels cannot: on the table, desk or shelf.

Certainly, the Cololight app is unpleasant and not as receptive as it should be, but Cololight Plus compensates with a really extremely edge design and more LEDs on the panel. Multiple LEDs make the scenes come to life with amazing effects and give the whole panel even lighting, even in the corners. Combined with support for all major home platforms and voice assistants, HomeKit included, LifeSmart Cololight Plus is a fantastic value and a great way to add a little color to almost any room.

Bottom line: LifeSmart Cololight Plus offers beautiful, dynamic scenes and colors that really go from the edge. Affordable price tag, HomeKit support and almost endless extensibility make Cololight Plus a great way to add a little color to your home.